Introducing the experience, values, lessons, skills and advice of elder Atlantic Canadian women. Each one carries decades of work toward creating change in how society operates.

Browse all the activists or narrow the list by province:


Ann Bell
Ann Bell's nurses union experience honed her leadership and political skills for addressing women's legal disadvantages and their lack of representation in public policy discussions, later expanding into many other issues that emerged while she led the Provincial Advisory Council on the Status of Women during its crucial first years. 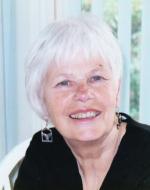 Ann Brennan
Refusing to live by the "wife of" conservative attitudes towards rural women, Ann Brennan claimed her own goals and worked to revise national agricultural policies, break through political barriers to build cultural relationships amongst Canadians and the Irish (in Northern Ireland and Ireland), and respond to local community issues. 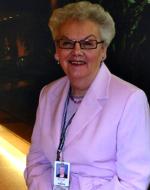 Betty Peterson, a.k.a. Kukuminash
In 2000, Betty received an Honorary Doctorate of Humane Letters from Mount St. Vincent University, Halifax "for lifetime work to bring about a more humane and just society for all of us." 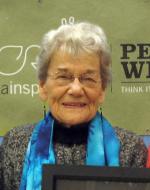 Carolyn McNulty
The driving force behind establishing the widely respected Romero House Soup Kitchen in 1982, Carolyn continues as its Executive Director, keeping a warm and sustaining place for her valued clients but constantly seeking enough resources to meet their needs. 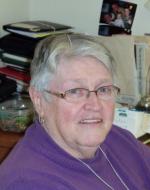 Edith Perry
From an early age Edith Perry realized that she had to work toward equal rights and opportunities for the economically disadvantaged and silenced as well as develop the skills to examine, with a critical mindset, the many levels of impact of social injustice. 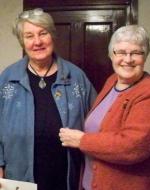 Elizabeth (Betty) Lacey
Believing in the power of well-informed rural women to make social change in their communities, Elizabeth (Betty) Lacey used persistence and leadership skills to expand the educative work of the Women's Institutes, but she worries about the future with so much competition for women's community development work. 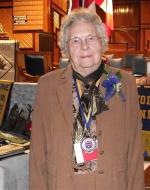 Joan Hicks
In addition to national and local level activism for the advancement of feminist agendas, Joan Hicks helped Nova Scotians of all walks of life realise how collaboratively-planned public library-based social development activity could be challenging and empowering. 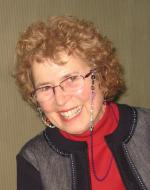 Kathy Sheldon
Kathy Sheldon chaired the first Women's Institute Conference held in NL and was a member of the governing body of the Associated Country Women of the World from the 1970s to 1986. 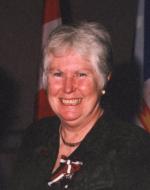 
Madeleine had laid out her notes and documents in preparation for the interview with Liz Burge, with whom she had worked years earlier on the issue of seniors' affordable housing in Fredericton. 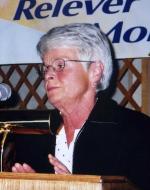 Maria Bernard
In 2002, Maria Bernard won the Individual Lifetime Achievement Award from the PEI Advisory Council on the Status of Women for achievements in working for the equality of women. 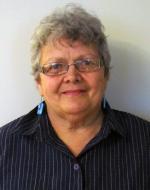