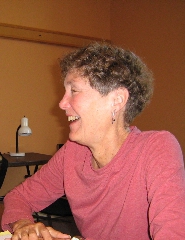 Quotation
I really rely on my intuition. That's something you get just by absorbing the environment and the dynamics. You pay attention all of the time with all of your senses.

It was a warm June day when Liz Burge was welcomed warmly into Sue's home—even by the family dog. The sitting room was filled with books and memorabilia reflecting Sue's life as a social activist over several decades. The conversation was balanced between her astute analysis of social change and community development and personal reflections on how she had developed as an activist herself.

Sue Rickards grew up in Ohio on the Kentucky border, where she witnessed firsthand the social and economic segregation of African Americans in the American South. After she completed secondary schooling in New Jersey, Sue attended university in Vermont and traveled to Spain and Chile to absorb the cultures of the families she lived with. Her first challenging job was to teach Junior High school in North Carolina in 1964—the year that public schools were ordered to desegregate by landmark legislation. After this, Sue worked at home for several years raising two children before the family moved to St. Lambert, Quebec, in 1966.

Sue and her family moved to New Brunswick in 1986 where she worked on three provincial task forces and wrote government speeches until she was assigned by the New Brunswick Housing Corporation to the challenging Elm Hill project. It was this work that triggered the social justice/community enterprise activities for which she became known over three decades in New Brunswick.

Sue holds a degree in Political Science from Middlebury College, Vermont (1959), and a Certificate in Adult Education from St. Francis Xavier University (1994).