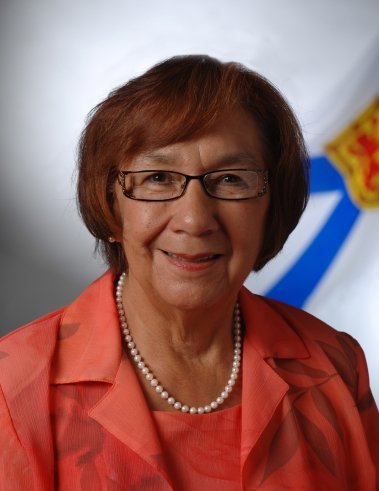 Quotation
I was always concerned about fairness and equality and to this day I still am a community-driven person. I like to see things done that are not only going to be advantageous for my people, but for everybody else.

Biography
Gracious, fluent, and crisp, Viola Robinson came well prepared for her interview with Liz Burge in Truro, Nova Scotia. The ambience of the surroundings receded as Viola's passionate narrative took Liz into the world of Aboriginal social justice, triggering layers of poignant reminders of the maltreatment of aboriginal peoples in Australia, Liz's home country.

Viola Robinson is a long-time advocate for Mi'kmaq people and the advancement of Aboriginal and treaty rights in Nova Scotia and Canada. She has served on countless boards and committees of organizations, and helped establish numerous projects, that promote the causes of Aboriginal people. These include the Mi'kmaq Legal Support Network, the Rural Native Housing Program, and with the Union of Nova Scotia Indians, the Court Worker Certificate Program at Unama'ki College of Cape Breton University. Viola played a major part in setting up the Made-In-Nova Scotia Process designed to address Mi'kmaq social, legal, and political issues between the federal and provincial governments. In 1985, she was a founding president of the Native Council of Nova Scotia and served as president until 1990, when she was elected as president of the Native Council of Canada.

An undisputed highlight of over three decades of related work was Viola's appointment as one of seven commissioners to the Royal Commission on Aboriginal Peoples between 1990 and 1995.

In addition to her honorary Doctor of Law degree (LL.D.) from Dalhousie University in 1990, Viola's awards include The Commemorative Medal for the 125th Anniversary of Confederation, 1992; the Halifax YWCA Women's Recognition award in 1997; the Frances Fish Women Lawyers' Achievement Award in 2003; the Order of Nova Scotia in 2009; and Officer of the Order of Canada in 2011.