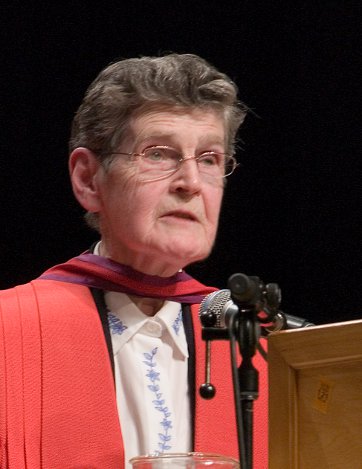 Quotation
Her love for all humanity was not confined to her choral work. She has been a tireless advocate of the dignity of the homeless, the poor, and the physically and mentally frail. She initiated a multi-faith committee that crossed denominational boundaries to spearhead the distribution of food and clothes to the less fortunate in the City of St. John’s. (<a href=http://www.mun.ca/gazette/past/issues/vol38no15/convocation12.php class=”external”>Oration honouring Sister Kathrine Bellamy</a> for the degree of Doctor of Laws, honoris causa, bestowed by Memorial University, 2006)

Two years after accepting her honorary degree from Memorial University of Newfoundland, Sister Kathrine agreed to be interviewed by Liz Burge. The setting was a comfortable room in the Convent of Our Lady of Mercy near her beloved church, the Basilica of St. John the Baptist. The atmosphere of peace in the room contrasted with the content of her stories of community, poverty and seeking resources to lend comfort and dignity to the lives of people on her watch.

Born in Bay Roberts, Newfoundland, Sr. Kathrine died on March 23, 2010 at the age of 86. Music was a feature of her household that helped form her, for her father, who came from England, taught her English folk songs. Her mother's Irish lineage embraced generations of musicians. She had "an extraordinarily fine soprano voice and was an accomplished pianist." Living in an era before television when people provided their own entertainment, Kathrine was exposed to sing-songs at home, and concerts and plays in her town.

Attending boarding school in St. John's from the age of 12, Kathrine came under the influence of the Sisters of Mercy, who "sparked a real love of learning" and showed by example a life of joyful dedication that appealed to the young girl. At the age of eighteen, she decided to enter the novitiate of the Sisters of Mercy. Although she had wanted to be a math teacher, she was to become a brilliant musician and social activist instead: "Music gifted me," she said with characteristic modesty.

Assigned to Our Lady of Mercy College, Kathrine learned to teach and also to conduct music with Sisters who were gifted musicians. By 1960, she was in charge of all classroom choirs in the school, as well as the Mercy Glee Club choir, which won accolades and wide recognition. This, Sr. Kathrine attributed to the "astonishingly sympathetic and supportive accompaniment" of Sr. Celine Veitch. Her own flair for teaching singing created choirs of young people and won, for example, the prestigious Mathieson Trophy in 1965 for the best junior choir in Canada.

Sr. Kathrine's belief in her choristers, delivered with an infectious sense of humour, inspired generations of children to push their limits and sing some of the world's most beautiful music. Based on tributes from now-adult choristers, her musical legacy can be regarded as a form of cultural activism with long-term, intergenerational impacts.

While teaching high school full-time, she was also appointed to the position of pastoral assistant at the Basilica of St. John the Baptist where for 14 years she helped with a variety of duties in the parish and instituted the outreach to the poor for which she was so well known. She was also the Basilica organist and choir director for 25 years.

Sr. Kathrine earned a Licentiate in piano from Trinity College of London, a Masters degree in Composition from DePaul University in Chicago, and a PhD in Musicology from the University of Wisconsin at Madison in 1973. She received numerous awards that included an honorary Doctor of Laws degree from Memorial University in 2006, the insignia for the Order of Canada, Member, in 2007, and in December 2006 an induction into the Order of Newfoundland and Labrador. Recognition was granted by the Roman Catholic Church in Rome in 2006 for Sr. Kathrine's work in liturgical music and her efforts to address the problem of hunger in the inner city of St. John's, with the award of the insignia of the Order Pro Ecclesia et Pontifice.

After her death the outpourings of sadness were underlined with gratitude for the many gifts she gave to St John's. Until her death, for example, Sr. Kathrine composed music on her computer and helped others to solve software problems. She was asked to write the definitive history of the Congregation of the Sisters of Mercy of Newfoundland, which became Weavers of the Tapestry. A later book was published after her death, The Mustard Seed: The Story of St. Clare's Mercy Hospital. 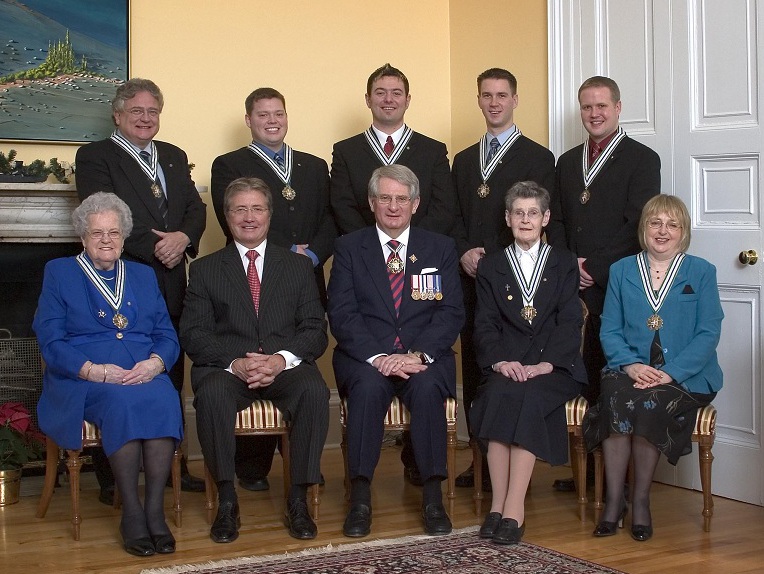