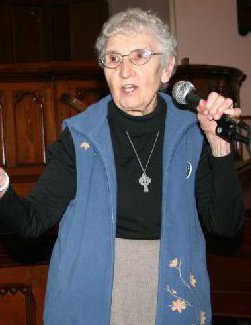 Quotation
It's in my bones that you do what you can for someone who is worse off than you are.

The calm and beauty of the convent chapel contrasted sharply with Sr. Angie Martz's activism world outside that space. During a wide-ranging interview before the chapel visit, Liz Burge, as interviewer, followed many examples of Angie's thinking to better grasp the complex analytical threads that bind together her social justice work. What personal conviction; what sustained capacity for action!

Born in 1924, Angie began her life on a farm in Duhamel, Alberta, a hamlet 20 kilometres southwest of Camrose. Her early years included two older sisters and their parents, and then in 1933 their brother Ronald was adopted as an infant, bringing new life into their home. One of Angie's early memories is of the out-of-work men during the Depression who came to their farm looking for food and shelter. "They were always treated with the greatest respect and given more than many would give," she recalled. One incident was formative for her: a man who had spent the night in their hayloft was leaving the barn the next morning when Angie's mother called out to ask him if he would like breakfast: "The man cried," said Angie. The incident has stayed with her, recalling her parents' compassionate response to need that has informed Angie's lifelong regard for vulnerable people as "very special."

Living in the country, Angie had occasion to meet the Sisters who taught catechism only in the summer, or from time to time at the Camrose Hospital. Yet at the early age of seven or eight, she knew that she would become "one of them."

The family moved to Edmonton in 1940, where she met the Sisters of Charity of the Immaculate Conception (SCIC) who served in their parish. Angie says simply, "I liked what I saw"—and in January 1942, she and both of her sisters travelled to Saint John, New Brunswick, to enter the Novitiate. Nearly seven decades later, Angie says without hesitation, "I have never looked back!"

The religious congregation of the Sisters of Charity of the Immaculate Conception was founded in 1854 in Saint John to care for the orphans left after the cholera epidemic. The Saint John congregation originated with the Sisters of Charity founded by St. Elizabeth Ann Seton in 1809, the first new community of women religious in America, inspired in turn by the work of St. Vincent de Paul among the impoverished people of Paris in the seventeenth century. As the need arose, the Sisters expanded their ministry with the orphans in Saint John to include teaching, social work, and health care.